On October 9, 2018, Green Bay FOP President Ryan Windorff had the honor of inducting Rick Harnowski as an Honorary Member of the Fraternal Order of Police, Green Bay WI Lodge #2 at the 2018 4th Quarter General Membership Meeting. Honorary membership in the Fraternal Order of Police is awarded to individuals who have distinguished themselves by outstanding service to this organization and the law enforcement profession. 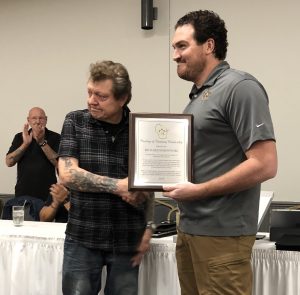 Rick has been a tattoo artist for more than 50 years, and opened Tattoos by Rick in Green Bay in 1980. Rick is a pioneer in his field and the leading proponent of tattooing regulations in the City of Green Bay and State of Wisconsin.

During Rick’s, career his work has been featured in museums, galleries, and top tattoo magazines around the world. Rick has passed on his passion and talent to his sons, Josh and Dan, who work alongside him at his shop.

As a testament to the impact of Rick’s work, St. Norbert College in De Pere is featuring a collection of Rick’s work in an exhibit named The Needle Has Moved from October 8 through November 2.

Rick has long been a supporter (and the primary tattoo artist) of law enforcement in our community and a supporter of Green Bay FOP. Rick has generously donated gift certificates for his services to countless Green Bay FOP events to help raise money for various programs and charities we support. Rick has also shared his talent by completing incredible pencil drawings and prints that support law enforcement. Rick’s philanthropy also extends to many other important events in our community, including being one of the top donors to the Jerry Parins Cruise for Cancer.

Rick’s actions adhere to the highest standards as a professional and a citizen and embody the spirit and values of the Fraternal Order of Police. 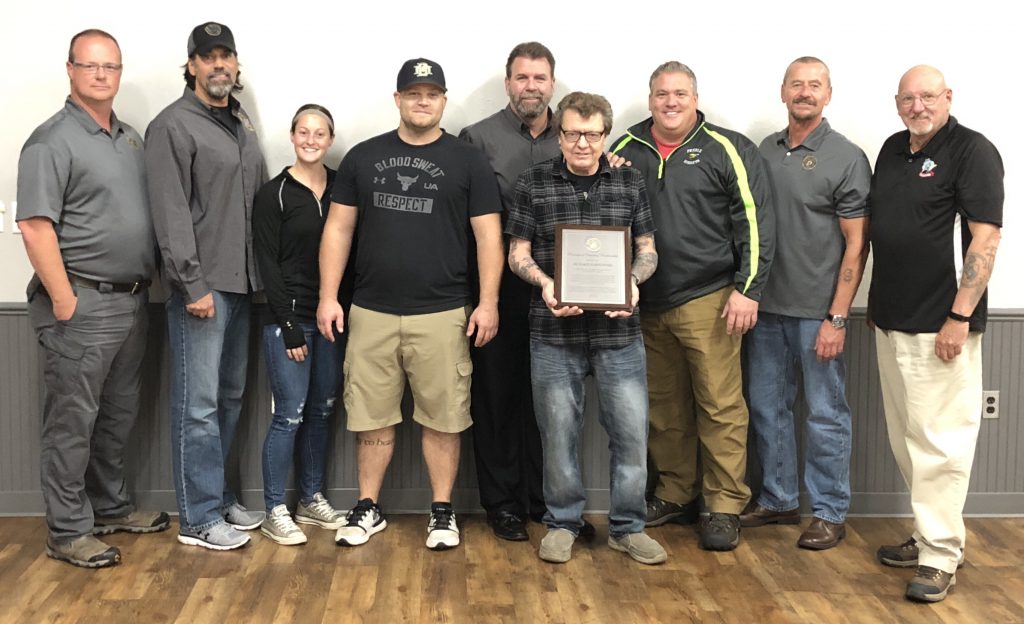 Rick with several Green Bay FOP members he has tattooed over the years.